“I think there is a lot of applications for [drones] and I think they will change our lives.”–David McKay, principal owner of Blackstone Forensics

David McKay was interviewed as a knowledgeable source in drone technology. He recently gave a speech about drone use at the PIABC’s (Private Investigators’ Association of BC’s) annual general meeting.

McKay was a former video analyst for the RCMP. He is currently president of Blackstone Forensics, and an instructor of forensics science. He also has extensive experience using video surveillance systems to conduct investigations and protect life and assets.

McKay owns two drones that he purchased online from a hobby company overseas.

When asked about how McKay planned on using the drones, he said, “I’m not sure. At this stage, it’s really just about testing them out as far as their reliability, what their capabilities are, [and] how stable they are for different platforms.”

Drones are not used extensively in Canada. Some people use “[drones] in snowboarding and mountain biking videos, and search and rescue,” says McKay.

McKay continued to talk about the current and future use of drones in Canada stating “You will probably see most of them flying around doing basic photography and video… and then you are going to see them doing aerial mapping of cities and large areas.”

As the technology gets bigger and more sophisticated, McKay says that we are probably going to see drones do “a lot of the things that a typical helicopter or plane would be doing.”

The RCMP has four drones in British Columbia. “I know [the RCMP] is doing a pilot project, which is basically to test [the drones] out to see what their capabilities are… what they are probably looking at doing is things like search and rescue,” says McKay. 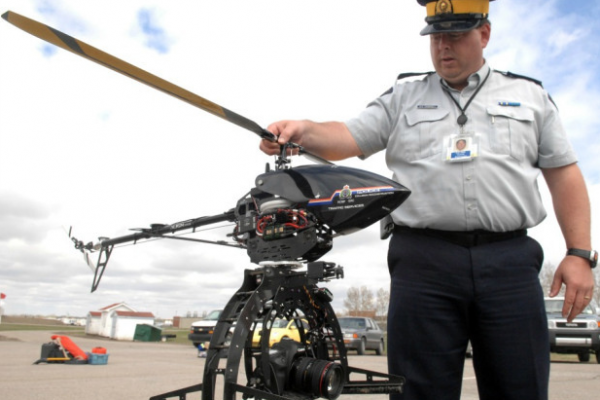 He gave the example of what happened in Saskatchewan where [the RCMP] used a drone to locate a crash victim.

McKay predicts that the RCMP may also use the drones “as part of the ERT response to get a bird’s eye view of a potential building or houses they are looking to do an entry into. The other obvious one may be for things like illicit grow ops.”

The private sector is also poised to benefit from drone use.

Westridge Security, a company in Maple Ridge is positioned to be the first private security company to commercially fly drones in British Columbia.

The drones can be rented out to agencies to assist in search and rescues missions, as well as other applications, such as bylaw enforcement.

The drones need to receive a flight permit from Transport Canada before they hit the skies.

Transport Canada issues a license to those that are planning to fly a drone for commercial purposes. A Special Flight Operation Certificate (SFOC) is required for every flight.

The commercial operator must provide a proper flight plan. The operator needs to demonstrate the predictability and reliability of the drone, and that it has ability to perform as expected.

Privacy legislation will face the challenge of keeping up with advances in technology. “You are going to see a lot of people using [drones], perhaps not following the rules, which will cause problems… there needs to be a lot of guidelines put out on their use that we haven’t even approached yet, such as privacy,” says McKay.

The Canadian Charter of Rights and Freedoms protects its citizens from actions that are unreasonable if they violate an individual’s reasonable expectation of privacy, but what we consider private, in the age of drones, will need to be clarified.

McKay addresses this privacy challenge saying, “generally speaking, if you have a fenced in backyard, you have a reasonable expectation of privacy in your backyard. Now if you have a drone above you, it’s going to be a lot more difficult to protect [you] from that type of privacy invasion.”

Part of the solution to the issue of privacy and drone use is that there is “going to have to be a set of rules for drones themselves [in] what is considered a private versus unprivate area,” says McKay.

McKay views drone use in public areas as more straightforward in terms of privacy because “if you are in a public space and [someone is] taking your picture or taking a video… I don’t think it’s much different from whether that person is on the ground or in the air.”

The debate over drone use, in both the private and public sectors, continues to be a hot topic in the news.