The Art of Hostage Negotiations

“Hostage negotiation is all about psychology, and successful crisis negotiators are among the most skilled practical psychologists I’ve ever met.”–Dr. Laurence Miller, clinical and forensic psychologist

There is a lot that goes on behind the scenes during a hostage negotiation, such as in recent news where 10 women were freed in Syria in a hostage deal. How do negotiators get hostage takers to give up their captors? What can you do to survive if you’re held hostage?

It’s during the start of a negotiation where it’s important to get the hostage taker on the phone as soon as possible; when they are talking to a negotiator, they are usually not hurting hostages, shooting at police or strengthening their position.

The first phase of hostage negotiations is the most dangerous. Derek Gaunt, negotiations instructor, has played a significant role in about 40 investigations. He talks about his initial interaction with hostage takers:

“When we get on the scene, the first 15 to 45 minutes of any incident is the most volatile and the most chaotic and it’s the most dangerous, so what we are trying to do is put the breaks on the incident, slow it down, bring it to a pace that’s manageable.”

William Bolt, police sergeant and crisis negotiator, emphasized the importance of patience during this stage of negotiations:

“The first thing you want to do is to help the suspect return to a normal state of being. When these situations start, everyone involved is in crisis mode. Rational thought does not exist. Fear is the biggest driver at this time. It may take hours to get the suspect calmed.”

Get the subject to do something in exchange for granting one of their demands, even if it’s very small. This makes the hostage taker “more obligated to commit because he has already committed” says Mr. Gaunt. This also helps build rapport.

Mr. Bolt emphasizes the importance of getting the hostage taker to open up:

“Let them talk and I mean talk a lot. It does not matter what they talk about, just talk. When a person is in a crisis, there is a huge amount of energy used… Once they are tired, their real concern is [to avoid] getting killed by the police and embarrassment. A surrender plan is agreed upon and the situation ends.”

The psychological profile of hostage takers, as well as how they negotiate with police in the movies, often isn’t based on facts.

The hostage takers tend to be a bit more “nuanced than the narcissistic psychopath you see on the big screen” says Justin Freeman, former patrol officer, “They most often feature suspects who are drunk, high, or have cognitive deficiencies of some kind.”

The reason people take hostages is usually less sensational than in the movies. Tom Hart, former detective at Durham Regional Police Service says, “Unlike in the movies, hostage takers don’t often have extravagant demands. The most I’ve ever given is cigarettes, some cash or food.”

Mr. Gaunt, who worked on a case with a hostage taker that was addicted to heroine and recently released from prison, says “He was trying to beat his addiction so he could get a job, but when he got a prescription for methadone to help him kick the habit, he didn’t have the $25 [to pay], so he went back to robbing because it’s how he knew to get money.”

Sometimes there are factors that negatively affect the ability of the negotiator to resolve a crisis, such as language, cultural and gender differences. In these situations, other negotiators may be called in.

What to do if you’re taken hostage 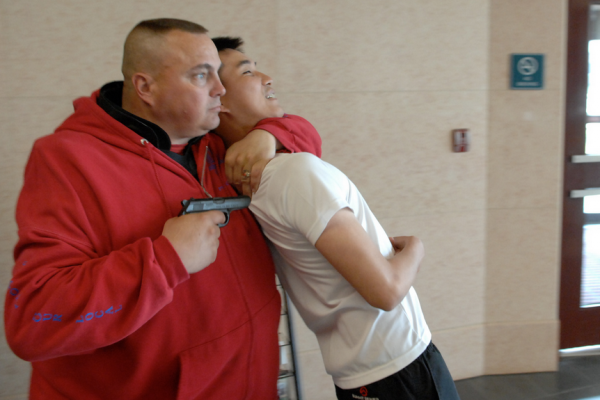 Although it may only take two or three minutes for police to arrive at a crisis location, the “average response time on the best day is going to be 30 minutes to an hour before all the specialized people get there,” says Mr. Gaunt.

He goes on to recommend that a hostage listen and empathize with their captor to “Demonstrate an understanding of why they are in this current situation… One of the first questions I would ask is ‘How did you get here today?’… Many folks just haven’t had somebody take the time to listen.”

This news article lists six ways someone can survive the ordeal of being taken hostage. It’s based on an interview with Wallace Zeins, a retired NYPD detective that has handled about 150 hostage cases. The steps outlined instruct the hostage to:

It’s important to leave negotiations up to specialists when they arrive.

Those interested in becoming a hostage negotiator should get training at a recognized institution.